Multiple Income Streams? The PAYE Dangers and a New Option for Pensioners

“Every advantage has its tax.” (Ralph Waldo Emerson)

An unfortunate reality for many non-provisional taxpayers with multiple income streams is a large and unexpected tax liability following a year-end tax assessment – even though PAYE was paid each month on their income streams.

Taxable income streams include salaries and wages, allowances, pensions and retirement annuities, rental income and investment income. Many taxpayers have multiple income streams: a common example is a pensioner receiving two pensions paid by two different administrators; or receiving both a pension and a retirement annuity. Other examples would include a person holding two part-time positions, or receiving both a pension and a salary, such as a widow who is employed but also receives a deceased spouse’s pension.

In all of these and other cases where taxpayers who receive income from more than one source of employment, pension, or annuity, the employees’ tax (PAYE) deducted by the respective employers or retirement funds may not be enough to cover their final annual tax liability assessed at the end of the year.

How can the PAYE deductions not be enough?

Because SARS calculates tax liability annually on assessment, a taxpayer could well face an unexpected and large tax liability, even after having paid PAYE every month on various income streams.

This is because the South African tax system requires adding together all sources of income of a taxpayer into a single total sum, which then determines the tax rate which applies to all the income combined.

So, the more the total income from all sources, the higher the tax rate and the more tax due.
By deducting PAYE every month, employers or retirement funds assist taxpayers to pay their tax liability in advance over the year. When only one employer or retirement fund is involved, the total PAYE deducted monthly should be equal to the tax liability on assessment, leaving no extra tax due on assessment.

However, where more than one employer or retirement fund is involved, each will deduct the correct amount of PAYE on only the salary or pension/annuity they each pay. In addition, each will also independently apply the rebates the taxpayer is entitled to.

When all the sources of income are added together during the year-end assessment, and any rebates are applied only once, the total income often pushes the taxpayer into a higher tax bracket. Applying this correct and higher tax rate on the full amount then results in an additional amount of tax to be paid on assessment.

The “pension plus salary” example below illustrates just how much more the tax payable on the total combined income assessed at the end of the year could be than the PAYE paid on each separate income stream during the year. 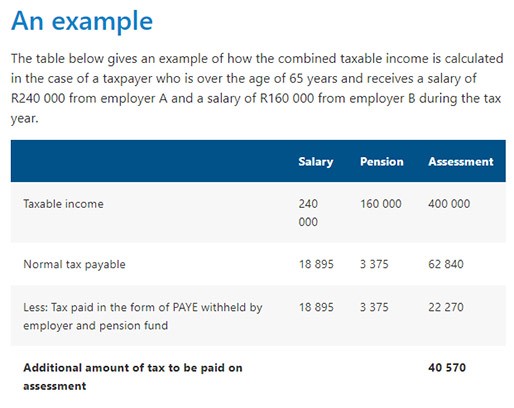 The taxpayer in the example will face an additional R40,570.00 tax liability on assessment, because although a total tax of R22,270.00 had already been deducted by way of PAYE paid during the year, it was too little to cover the full annual tax liability of R62,840.00.

Large, unexpected tax debts such as this often lead to delayed payments and therefore penalties, further burdening the taxpayer.

How to avoid the problem

Taxpayers with multiple income streams, who are at risk of a large tax liability when the annual income tax return is assessed at the end of the tax year, need to have more accurate monthly amounts of PAYE deducted.

To voluntarily pay more PAYE, you have two options –

Either way, professional assistance is highly recommended. Ensuring that more appropriate amounts of PAYE tax is deducted during the year will eliminate surprises and ease the financial burden when submitting annual tax returns at the end of the tax year.

Pensioners – a new option for you from 1 March

Not many pensioners are currently making use of this option but, fortunately, recently introduced legislation has enabled SARS to provide them with a new service from 1 March. Using the latest data available to it, SARS will determine a more accurate PAYE deduction amount for pensioners with multiple income streams, and then automatically provide their retirement fund administrators with this new PAYE deduction percentage. This will allow a more accurate amount of PAYE to be deducted from pensions or annuities payable from March 2022. The rate will be valid for the entire tax year unless the taxpayers’ circumstances change. However, you can request retirement fund administrators to rather use the normal PAYE deduction rate, or to deduct PAYE at an even higher rate than the increased rate provided by SARS.

This site uses cookies. By continuing to browse the site, you are agreeing to our use of cookies.

We may request cookies to be set on your device. We use cookies to let us know when you visit our websites, how you interact with us, to enrich your user experience, and to customize your relationship with our website.

Click on the different category headings to find out more. You can also change some of your preferences. Note that blocking some types of cookies may impact your experience on our websites and the services we are able to offer.

These cookies are strictly necessary to provide you with services available through our website and to use some of its features.

Because these cookies are strictly necessary to deliver the website, refusing them will have impact how our site functions. You always can block or delete cookies by changing your browser settings and force blocking all cookies on this website. But this will always prompt you to accept/refuse cookies when revisiting our site.

We fully respect if you want to refuse cookies but to avoid asking you again and again kindly allow us to store a cookie for that. You are free to opt out any time or opt in for other cookies to get a better experience. If you refuse cookies we will remove all set cookies in our domain.

We provide you with a list of stored cookies on your computer in our domain so you can check what we stored. Due to security reasons we are not able to show or modify cookies from other domains. You can check these in your browser security settings.

We also use different external services like Google Webfonts, Google Maps, and external Video providers. Since these providers may collect personal data like your IP address we allow you to block them here. Please be aware that this might heavily reduce the functionality and appearance of our site. Changes will take effect once you reload the page.